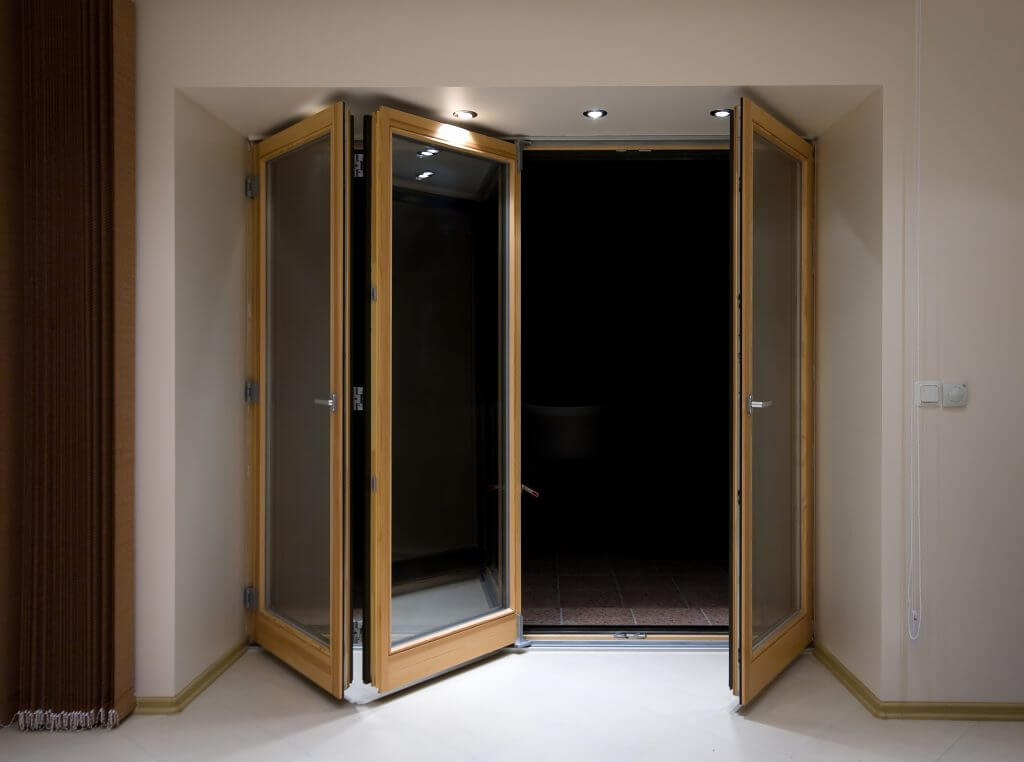 The ambience of our spaces plays a quintessential role in our lives; it affects us on a subconscious level. And since most of our time is spent in our homes or offices, it is imperative that these two spaces’ interior and exterior décor bursts forth with life – from sleep-inducing bedrooms to clutter-free kitchens to haven-like cabins.

A component that outperforms the rest in terms of making or breaking the vibe of a space is the door. Doors give the first impression of any space, both in terms of aesthetics and convenience. And since you don’t get to make a first impression twice, opt for a matchless door design – folding doors.

Folding doors, also known as bi-fold doors, use the concertina effect to incorporate more than two door panels into a single structure through runners. These runners are attached to every panel, so they can slide and fold with your pulling action. The result? We get to witness grace and elegance in tandem with space-efficiency! But don’t you want to know more? What makes them so special? To quench your curiosity, here are four lesser-known facts about folding doors that will surely make you fall in love with them.

Yes, you read it right. Folding doors aren’t a new concept. You might have assumed folding doors to be a modern trend designed by some innovative engineer, but on the contrary, their revolutionary existence popped up somewhere in the first century AD. Cities of the prehistoric Roman and Greek empires used to have folding doors in their entrances. Even the Egyptian tombs had basic bi-fold mechanisms. As glass wasn’t available during those times, their surface was purely constructed out of wood or concrete.

Early examples of folding doors can be seen in a few excavation sites. A folding door belonging to the Roman Empire was recently excavated in Pompeii, Italy. It is estimated to have been functional in the first century AD. Another excavation of a bi-fold door was done in Zurich, Switzerland. That door is expected to be around five thousand years old.

You Can Get an Extra Door with a Folding Door

Enough of the history lesson, let’s talk about the features that modern-day folding doors have to offer. Since the process of opening and closing a folding door can be quite tedious, you get the choice of adding an extra layer of a two-panelled door, also known as a traffic door. It adds two important features to the folding door, namely, time-efficiency and safety.

There happens to be many places that see a serious amount of traffic – think entrances of hallways, corridors, meeting rooms, etc.; such spaces are flooded with people scurrying in and out. Doors installed in heavy traffic spaces ought to be highly functional, mainly in terms of improving time-efficiency, but without compromising on safety. Here, the concept of a standard folding door doesn’t suffice. This is where a traffic door comes into play.

In terms of safety, a traffic door added to a folding door can guarantee double-layered security. There is always the possibility of intrusion and theft during the wee hours. Adding an extra layer of protection confirms that the interiors remain safe and secure.

The versatility of folding doors is exceptional. Their space-saving capability allows you to incorporate a folding door mechanism anywhere, be it a residential property or a commercial one. Even inside these two verticals, there are several places where bi-fold doors are used and widely accepted.

In the interiors of residential areas, a bi-fold mechanism can be used as a cupboard door, shower door, window, bedroom door, closet door, etc. You can also interconnect multiple external areas through a folding door. For instance, the living room can be adjoined to the balcony, kitchen, and dining area with the help of folding doors. A folding door’s transparency gifts its residents with natural light. They can enjoy the morning sunshine, the evening serenity, and the moonlit night, all from the comfort of their homes.

The functionality of folding doors also finds a way in the commercial sector. A corporate building can be adorned with a bi-fold’s grace and elegance in the form of meeting room doors, personal office doors, office entrance doors, and much more.

Folding doors, when installed with low-E or heat-reflective glass, facilitates proper thermal insulation. A well-structured folding door does not allow the outside temperature to determine the temperature of the interiors. Heat-reflective glass ushers in heaps of daylight but blocks unwanted heat of the sun, thereby, maintaining comfortable indoor temperature. This, in turn, reduces energy consumption and energy bills.

However, this function is highly dependent on proper installation of the glass with the door frame. This is why you should always trust reliable fenestration experts such as AIS Windows.

AIS Windows believes in providing graded quality doors and windows for our customers. Our professional support assures highly-customised solutions and utmost satisfaction. We offer 360-degree fenestration solutions, right from the selection stage up until after-sales support.

Waste no time and avail the benefits of expert fenestration with AIS Windows! Get in touch.